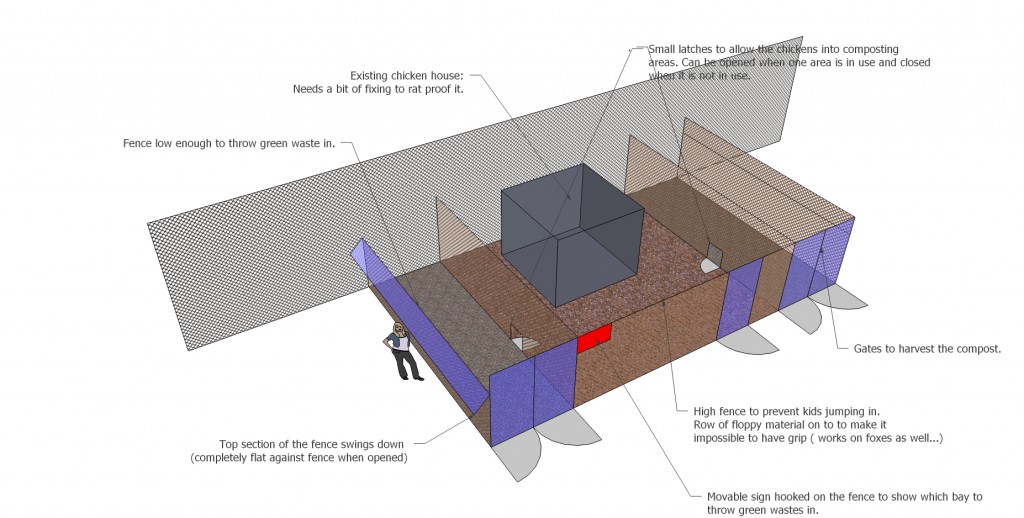 This project aims to fully retrofit the chicken area at the ******* St Community Garden. This would also allow to greatly simplify and maximise the on site composting processes.

The current chicken area is in need of improvement:

The current composting system could also be improved:

If the project was to be implemented, we could expect:

If the budget can be secured and the consultation process with the gardeners involved is positive the project could be implemented very rapidely.

The design could be fitted to match a budget if the current provided estimate was beyond a possible budget.

The design can be amended if the gardeners so require.

The chicken & composting system we are suggesting offers a central yard where the chickens live at all times.

The central yard would be of same dimensions to the existing one.

The fence to the central yard would be quite high (2m) and hard to climb over.

The central yard would be accessed through a single gate.

The existing chicken house would be sanitised but not modified.

Two smaller runs would be available to the chickens through two small latches which can be locked or opened as needed.

When the top section of the fence would be in the upward position, it could be locked with a pad lock.

The runs would be accessed through two large double gates. This would allow for easy access with wheel barrows at compost harvest time.

Green waste would be added for a determined amount of time, typically a month period.

Chickens would have access to the run #1 for the entire period.

The small run #1 would be left to rest during the month period where the yard #2 is in use.

At the end of the month period the compost harvested or left for the chickens to come back to.

Typically one harvest a season can be expected with such a system. It can also be harvested more regularly or left to build up indefinitely (years). The harvest is accomplished by digging the soil & compost loosely with a mattock and lifting the compost into a barrow with a fork. It can be harvested with forks or spades directly but the mattock helps loosening the soil. Vigour is needed for the mattock, but it is relatively quick and quite easy. Lifting the compost can be done with a fork and doesn’t need to be physically straining. A regular seasonal harvest would mean distribution of the compost could be formalised.

The hard woody materials that would get thrown in and resist composting could be thrown along the furthest fence line of the run (creek side) and left there indefinitely. This acts as a refuge for the invertebrates that will eat the green waste and that are eaten by the chickens. The last meter before the furthest fence line of the run would hence never be harvested.

A rubbish bin would be put in the corner of the runs with clear signs (must be a eye level, not written on the bins) for plastic wastes. Perhaps a transparent plastic bag or glass jar could be filled with plastic found in the compost and a unhappy face drawn on it too.

The existing compost bays could perhaps be retrofitted into very high garden beds for people needing to garden fully standing up.