This will be a topic of interest for most gardeners.

For us in Melbourne, this is specially 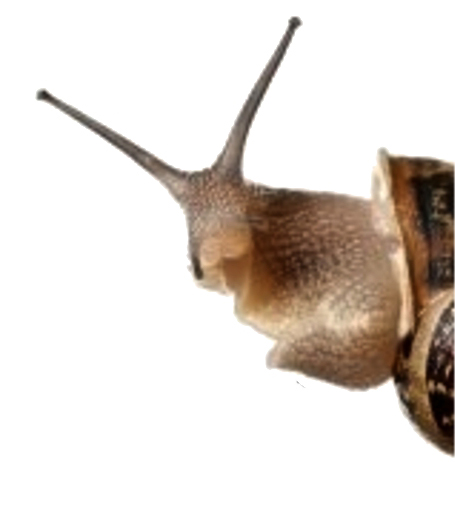 relevant to those gardening on the heavy clay soils such as the area around the creeks.

Some gardens seem to be cursed with an unending population of gastropods (from ancient Greek, meaning literally stomach-foot). One such garden we worked on over an extended period of time, seemed to regenerate its population within minutes. Friends will remember rainy summer nights spent hunting snails with a flash light.

Like with most “problems” or “pests”, there are many drastically different perspectives one can adopt to find an appropriate strategy to deal with it.

In the case of Helix aspera, as with many problems linked to the garden, the solutions can be divided in two groups:

Fight it, or use it.

Remove habitat: Like with pretty much all pests, the first point to address is habitat. Snails are mostly active at night, and they need shelter during the day, specially on very hot summer days. Once again, understanding is often synonymous with victory. Some have observed them digging their way out of the ground, so you will probably never be able to fully remove their habitat. Yet, cleaning up the garden a bit is a good thing to do if you want to tackle the snail problem. Piles of branches, old tarps, that bunch of old plastic pots in the corner… can all harbour enough snail to eat your garden bare!

Catching them: Snails like to congregate in groups, where they can indulge in their favourite activities, cuddling and sleeping. Finding where they gather is the best way to keep the population down. They love the lip of plastic pots, old pipes, planks of timber and generally smooth shaded cool surfaces. You have to think like a snail. You are slimy, you can’t allow yourself to dry out or overheat, many things out there think you taste nice. Knowing this allows us to keep an eye on prone areas and remove them regularly.

It also allows us to set up traps that we can inspect regularly. 3 inches plastic pots, upside down tea cups and sections of pvc or terracotta pipes are definite winners. These can simply be left here and here in the garden and lifted one in a while for inspection.

As mentioned above, another simple technique to catch snails is a walk in the garden at night, preferably during or after the rain. Once you have caught them, you are free to decide what to do with them. You can have a look at the “use them” section for a few ideas, or do the nice thing and take them to the park.

Kids love the challenge, and their collaboration can easily be bought. $5 a bucket? 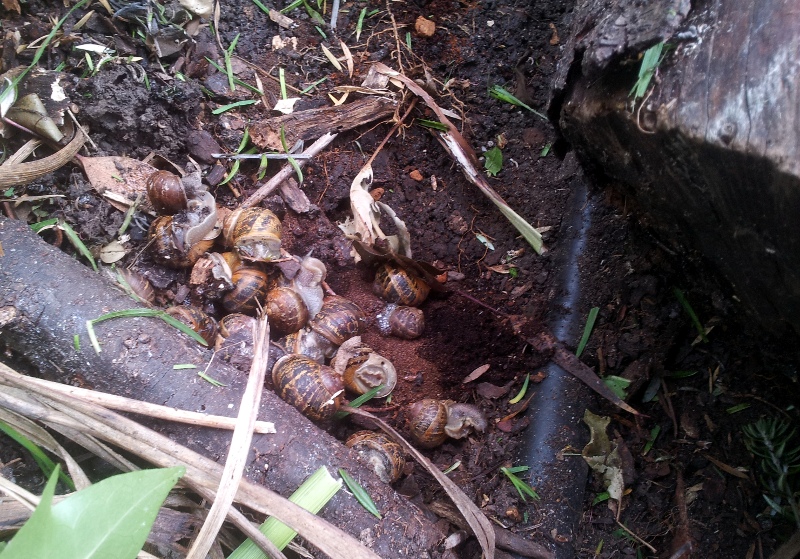 Killing/poisoning them: This is often where most of the effort is directed in people’s garden. Unfortunately, most techniques used do not give much results. The classic one is the “beer trap” or “Vegemite trap”. From our experience, these are only mildly effective and one always ends up killing a whole lot of innocent wildlife (lizards, insects, spiders…). The traps need to be changed regularly and mostly, they represent a serious waste of two things too good to throw; beer and Vegemite. Its almost un-Australian really…

What does work though, dangerously well, are the little “snail pellets”. A few downsides;

If you do decide to use them, make sure to keep them somewhere out of the rain (under a pot, in a pipe or container) so you get more out of them. 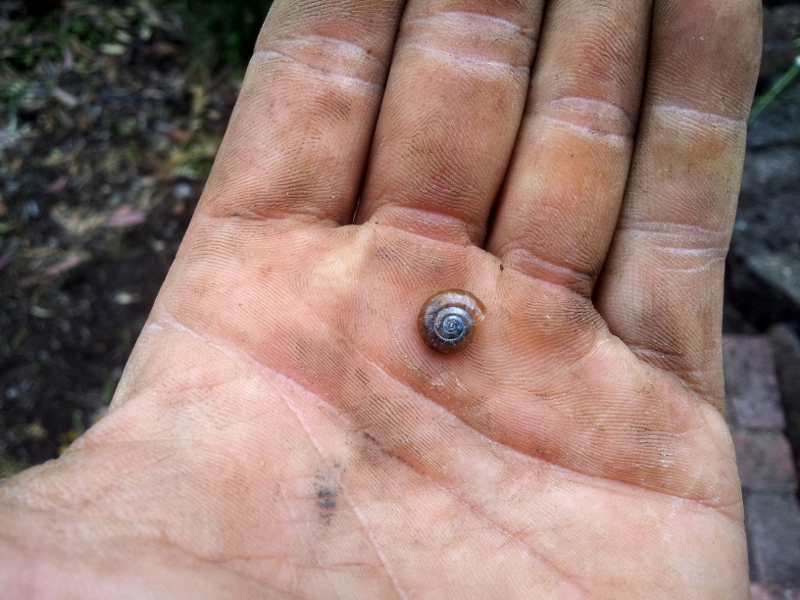 Snails are a pest because they compete with us for food. But they also have their place in a healthy ecosystem. They can be understood as miniature ruminants, mini cows, providing the same soil enriching services cows do. And like grass eating mammals, they too turn plants into protein.

A large healthy garden will harbour a fairly largesnail population whilst leaving plenty to eat for the gardenner.

If we decide to see them as a useful resource, speeding up the process of turning plants into soil and converting plants into protein, our approach to dealing with them is quite different.

As we mentioned, it has been observed that when a snail population is fully removed,  another pest takes its place. Ear wigs, different snail species, slugs … when there is available ressources, nature its such that a specie filling the same niche will arise to occupy the space. Nature doesn’t like vacuum, that is one of its laws.

Eat them yourselves: Already we can hear someone screaming “yuuuuuk!” at the idea of eating snails. Even if we are partial to boiling them and then oven baking them in garlic butter, it is worth mentioning that there are also other ways to turn snail proteins in a more commonly palatable animal proteins.

Of course, before eating your garden snails, some serious preparation is needed. Snail are known carriers of parasites, some of them pretty awful. Really, research it if you dare. BRAIN. EATING. PARASITES.

The traditional way to prepare snails is to start by a little forced fast, and then feeding them chosen herbs and leafs. They will tend to taste a bit too earthy otherwise. After this step is completed, the technique varies from layering them with rock salt (to “purge” them), washing them in fresh water and more. What is invariably the same, from one recipe to the next, is that the snails are then cooked twice. KILL. THE. PARASITES. DEAD.

Do your research, and enjoy.

Note: Libertas gardens will not be held responsible for harm of any type resulting from eating garden snails. Specially harm to the snails.

Feed them to your birds: Chicken will happily turn snails into eggs, so will ducks. Some warn you about feeding snails and slugs to chooks and ducks, as they could get infected by the above mentioned parasites. We asked our chooks, they didn’t mind the risk.

A well designed and planned garden can easily allow for birds to be let free in areas of  the garden for regular de-snailing.

Introduce & encourage their predators: Blue tongue lizards, native carnivorous snails, leopard slugs and some birds will devour tons of the slimy molluscs with great pleasure. You can buy these creatures or create habitat for them and hope they will move in. Of course your chances of a blue tongue lizards appearing in a Carton backyard are rather slim. 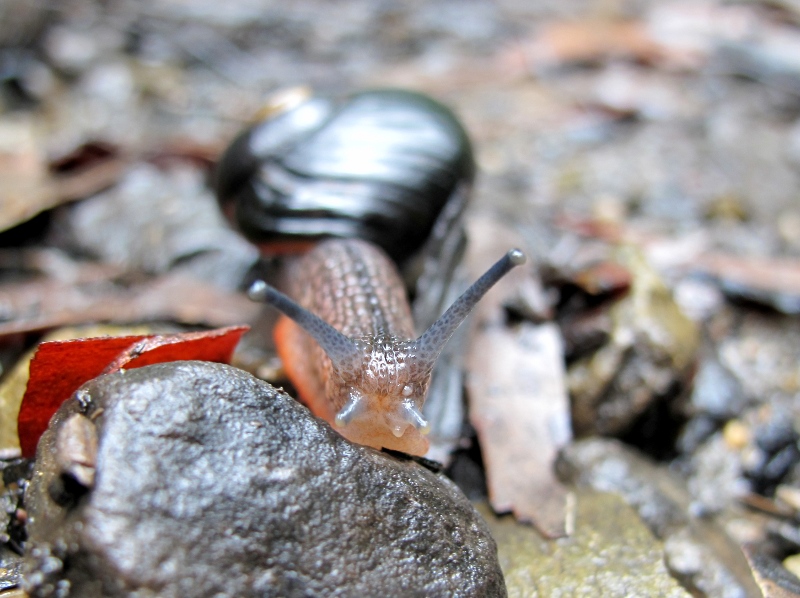 Use snails against snails: Karma wise, these techniques are not recommended. But they have been proven to work quite well. The mechanism behind the first one can be understood in many ways. The idea is the following: Find a lot of snails, preferably from different areas. Crush them into a paste, water it down, and water your garden with the resulting slime. Some think some of the crushed snails will without a doubt be carriers of snail diseases and that spreading the water around will infect your existing population. Another theory is that the unbearable smell of their dead relatives will scare the poor buggers away… without a doubt, it is a morbid technique. But yet, it is a proven one!

Another technique, favoured by Biodynamics this time, is called “pest peppering”. Have a look here for more info. Its a bit magical, as often with BD, but it too seems to work. Pretty much, it consists of burning the pest to ashes, and then sprinkling the ashes around!

A word on deterrents

Broken eggshells, copper wire and tapes, chilli flakes, tobacco… are all said to keep snails away from plants and garden beds. Try it if you want, but know that none of it works when it rains! And when it rains is when the snails are out!

Rather then fighting them to extermination, it is worthy to try and find balance. Implement mechanisms that allows you to control the population, as well as systems that channel their energy and nutrients back into a natural cycle. A natural cycle that benefits, you.